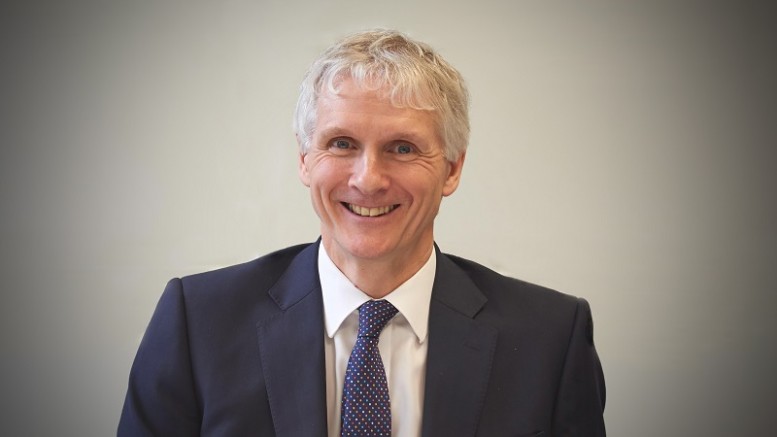 “So, what kind of a Chief Executive am I? Perhaps more importantly, what kind of a person am I? Well, these are things that you’ll make your mind up about as you come across me and, hopefully, read my blogs and tweets. And, if you spot me, stop me and introduce yourself – then you can also find out first hand.”

A former special school head teacher, Mark specialised in children’s services in local government and joined Birmingham City Council in 2014 from Solihull Metropolitan Borough Council, where he was Chief Executive and Director of Children’s Services. He is also the current president of the Solace Group, which represents Chief Executives and senior managers working in the UK public sector.

Being in charge of Europe’s largest local authority must be a daunting task, but Mark seems to wear this responsibility lightly. If you don’t believe me, just take a look at his Twitter account. Not only does his Twitter ‘photo’ seem to change every few days (it’s usually a picture of a band) his output is refreshingly free from ‘corporate speak’. He’s also happy to have conversations on Twitter and is not immune from making fun of himself. Guess the band. One of Mark’s Twitter profile pics.

This juxtaposition of being a very senior city leader with an irreverent Twitter account may seem odd at first, but as his Twitter profile clearly states: “First & foremost, me – Mark Rogers. Also, Chief Executive @ Birmingham City Council.” It’s his own personal account, so why shouldn’t he be free to express himself in his own way? His profile also mentions that he’s a big fan of vinyl. This is a CEO after my own heart.

Mark, this is a question I ask every leader I interview: how long have you been using Twitter and why did you originally sign up?

I’m not quite sure actually. I think I’ve had an account for about five or six years, but it’s only become a major obsession since arriving in Birmingham. Why did I sign up? Because there were a couple of fantastically funny-serious accounts being run by West Midlands Police back in 2011/12 and I realised what a powerful, educative and entertaining medium it could be. Basically, I hold Chief Superintendent Sally Bourner responsible. She embraced Twitter and showed me the way.

What do you get out of Twitter, both personally and as Chief Executive?

I get to hear about things and engage with people in a much broader way than just going to meetings. It opens me up to a lot more people than I meet day-to-day and it gives me a connection with those who I might not get the chance to meet. It’s a great broadcast medium but, if you use it regularly and constructively, it becomes a place for debates too.

“I get to indulge in talking about my favourite topic – vinyl!”

Plus, I get to indulge in talking about my favourite topic – vinyl! Seriously, the balance is important to me. My account is dual work-life and that’s important. I can be sparring one moment about local government’s role and relevance and another I’m trying to persuade people that shellac is the most important commodity the world has ever known.

In our always on, socially connected age, how important is it for leaders to engage with their communities via social channels?

Essential. Every leader should have multiple channels through which they can interact and social media gives an unprecedented choice from which to add to the pre-existing formats. I think it is very important to create opportunities to engage with everyone – but in a way they are happy with. In the past it has very much been a broadcast type of engagement from councils; social media makes it much more personal and interactive now.

“Every leader should have multiple channels through which they can interact”

I am always conscious, though, that there is still a whole wide world out there that isn’t glued to Twitter, Facebook and the like – and it is important we don’t lose those connections. So personally, for me, as a person not just a leader, it is important for me to be open and accessible to everyone – social media, Twitter in particular, makes it much easier to do that as I can do it in my own time and in my own way.

What are the implications for leaders not engaging on social media? Does it matter if they don’t?

Leaders who don’t embrace the ever-evolving social media landscape miss out on reaching those for whom these new means of communications are their preference. Why would you want to shut down so many people from being able to interact with you?

The obvious biggest implication of going online is you’re putting yourself out there in a very public way, so there is the risk that everything you say is judged and could be misinterpreted. But I am simply “myself” on there so I hope most people take me at face value.

I do feel that if you aren’t on there and contributing you’re missing a trick as it is a valuable way to hear with is going on in our communities, and within our profession.

Who do you see as your main audience on social media? Does it vary depending on the channel (Twitter and LinkedIn)?

My main channel is Twitter and I would say my audience is anyone who wants to engage! It’s a work-life medium because, for me, the two are inseparable. Obviously, I’m trying to reach people from across the city because I work for them and I find it a great way to engage with everyone – from someone who is feeling frustrated by the council, to staff, residents and anyone interested in local government – or indeed vinyl.

Because I’m also a Solace member, I see social media as a means of connecting much more widely to press the Society’s case for developing the best professional leadership in public services.
Also, I’m told I’m a bit of gobby sort, so Twitter helps me just be heard!

Do you think your active social media presence enhances the Council’s reputation with stakeholders?

You would have to ask them that! But I would hope so. I do know that the responsiveness is appreciated – it helps me to show that things can get done.

A lot of chief executives are scared stiff of using Twitter and ‘saying the wrong thing’. You, on the other hand, not only seem to embrace it, but appear unafraid of speaking your mind and even making fun of yourself. Are these CEOs worrying too much, or does it depend on the sector they operate in (for example FTSE100 CEO vs local authority CEO)?

As long as you’re authentic in what you say and you aren’t behaving recklessly then I think it is only a good thing being on Twitter. There is as much risk in doing an interview in the traditional media, as on social media. Also, these days, everything you do is subject to scrutiny – meetings are webcast, residents can video you on their phones and publish communications you have with them. So I think if you’re sensible and sensitive then you shouldn’t be afraid.

And it is fun. I love some of the exchanges I get into. There’s lots and lots of smart and funny people out there who can make you think or just cheer you up.

What are the biggest challenges (and opportunities) for senior leaders (in any sector) to tap into social media?

The biggest challenges are overcoming the (irrational) fear of being deluged with criticism and complaints and coming across as fake and staged. In order to get meaningful engagement you need to be yourself. All my Tweets are me and I like to think my authenticity is what works (although that does sound like pretentious twaddle).

“In order to get meaningful engagement you need to be yourself”

If I ran everything I said past our corporate communications team it would mean I wasn’t replying quickly, and that is one of the greatest opportunities on social media – the immediacy. Also, the ability to engage – our communities no longer just exist in a tangible physical location, but they are online and are possibly even more powerful because of that.

I assume you do all your own tweets?

I’m sure if you spoke to our A. D. for Comms and she would be very keen to point out that they are indeed all written by me … what’s the point of having someone “ghost” you? It’s not you then, is it?

Do you encourage Birmingham City Council’s employees to use social media?

I encourage everyone to listen to what is going on in our city and be engaged with our communities, but in a way that they are comfortable with. Putting yourself out there as a public face of the council is something that does require a degree of armour and not everyone has that. But you do learn valuable insights into what citizens want and feel when you’re on there.

Finally, with Millennials set to become 50% of the workforce by 2020, are you considering signing up for SnapChat any time soon? 🙂

You assume I know what they are! A religious group that thinks the end of the world is nigh?
Seriously, I’m not sure the Millennials would want me invading their space! If it is something that would help with the council’s work, I’m always open to exploring new ways of engaging. But at the moment I only really have time to tweet and if you are going to do something, then you should do it properly.

Huge thanks to Mark for an enjoyable and very informative interview. The life of a local authority Chief Executive is busy and no double often very stressful – but it’s good to know there’s always time to talk about vinyl.