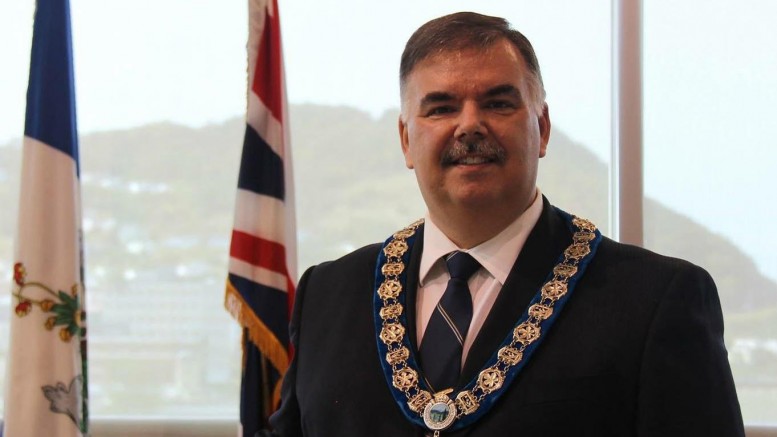 A single tweet led to a recommendation which led directly to this interview. That’s the beauty of social media – and why I believe it’s one of the most powerful communication tools available for CEOs and other leaders.

My interviewee, Charles Pender, the Mayor of the city of Corner Book in Newfoundland , is a perfect case in point. Charles used social media to help him campaign for the Mayorship and continues to use it to keep citizens informed about everything from power outages and road closures to new regulations and community events. For him, social media is the ideal medium to talk about his work and what’s happening in the city in an informal, approachable way. It’s also something his constituents clearly seem to appreciate.

Charles, Corner Brook looks like a wonderful place! What’s it like being the Mayor?
You’re right, Corner Brook is an absolutely amazing place to live and I am quite lucky to be able to serve as Mayor. Like any municipality, no matter the size, there are lots of challenges but also lots of rewards. Corner Brook is a relatively young city. Knowing that I am contributing to the continued growth and betterment of my community while being able to serve my fellow residents – people that my parents knew, people that I grew up with, along with people who have moved here from all over the world – gives me a great feeling of satisfaction on a daily basis. This is the question I ask all my interviewees – why did you originally sign up for Twitter?

I have always been interested in technology and new ways of doing things. I first signed up for Twitter back in 2010 while working as the Director of Alumni Affairs for the local University as a means of connecting with students. I assumed they would be more inclined to sign up to social media.

Did Twitter play a part in your campaign to become Mayor?

Twitter did play a part in my campaign, although not as much as much as Facebook or my blog. While most traditional media were tuning into and following Twitter, many residents had not yet really caught on, but like all social media it was still a means of reaching more people using a different platform.

Twitter is an important tool that allows me to connect with people in the community instantaneously. I can provide immediate updates on emerging situations, whether that is something as routine as a traffic light out of order, a water outage, a public notice, or something more urgent such as updating people on road conditions and snow clearing operations during a major snow storm. It also allows people to connect directly with me and let me know if there is an issue that needs to be addressed by our staff.

Like most people, I have had a personal Facebook page for years; however, prior to my last electoral campaign in 2013 I set up my page as a way of communicating directly with residents as I campaigned, complete with statements on various issues, photos of my daily events and meetings with residents. Once I was elected I converted it to my “Mayor’s” page and use it almost daily to update people with more detailed information than Twitter allows.

I also find the Messenger feature an excellent tool for residents to reach out to me with an issue that I can then pass along to appropriate staff for review and action as required. It allows me to better understand what issues are important to our residents and, more importantly, it helps reduce frustration on the part of residents as they know someone is listening to their concerns.

Transparency and communication are clearly very important to you. Would you be able to communicate in the way you do without social media?

One of my campaign promises was to ensure openness and transparent communication should I be elected. I find social media allows me to keep that commitment very easily. Oftentimes it is simply another platform where I repost items already posted by the official city media, but we don’t always have our communications staff working when there’s an issue, like early morning, after hours, during a holiday or on the weekend. As Mayor, I can access the information from our city personnel and provide updates that give our residents a certain level of comfort and security in knowing that we are aware of an issue and that we are working on it.

Who do you see as your main audience on social media?

I originally thought it would be younger people, in the 18-30 year old range, but actually people of all ages seem to follow my feed and, surprisingly, those in the 35-65+ range are those who interact most with the information in the form of sharing or commenting. Do you think you’re unusual as a city mayor in your use of social media? Will it eventually become an essential part of the job?

I know many other Mayors who use social media to some extent and I often hear from people who are amazed that I am so reachable through social media. I guess it all comes down to how comfortable you are connecting directly with your residents, but there is no doubt that social media, when used wisely and judiciously, can be a very powerful tool. I am not convinced it will be an essential part of the job for everyone, but it can certainly help those who do decide to use it.

Judging by the comments and feedback you get on your social channels, your constituents seem to really appreciate your presence. That must be rewarding.

It is very rewarding to see so many positive comments. Even when I see something negative, I try to filter through the hyperbole to get to the key issue – people are reaching out for a reason and sometimes they get frustrated – but if I can engage with them and get to the root issue, I can help resolve the matter which usually helps turn a negative into a positive and that in itself is rewarding.

I recently signed up for Instagram to share pictures of life around the community, it’s just another forum for reaching out. I do have a Snapchat account that I used with my own children mainly, but I haven’t used it in quite a while. I am also on LinkedIn which I follow regularly, although I don’t post as much there as on other social media. What are the biggest challenges (and opportunities) for senior municipal leaders to tap into social media?

It is important to set some personal guidelines. You can’t nor should you always respond to comments – especially on Twitter. Avoid the trolls, they are not worth your time. I never respond to people who hide their name or identity. When I do get a question, comment or complaint, I usually ask the person to go offline to deal with their issue one on one. Most people just want an answer – if I can provide that answer for them and help resolve their issue, that’s all they want.

Some people will try to bait you. I am, after all, in a political role, so this will become more evident especially as we get closer to the next municipal election this Fall. Always be forthright and provide accurate and honest answers, and if you don’t know the answer say so, and if you make a mistake, rectify it as soon as possible.

If you could give advice to other mayors or municipal leaders who are reluctant to embrace Twitter, what would it be?

Like anything, before trying it observe how others use it. Twitter is a tool like any other, so start slowly, learn from others and always, always read what you write before you hit TWEET! When you feel the urge to respond to the trolls, remember that you are not talking one on one. There is no such thing as privacy – if you tweet it, it is there for everyone to see forever…so think twice. But if you really want to reach out to your constituents, keep them informed and speak directly with them, then those 140 characters can be very powerful indeed.

Tell me a bit more about your blog.

I have always been interested in what’s happening in my community. I used to write articles for the local newspaper but they were infrequent. My blog allows me to share thoughts on any number of issues as they arise and, in particular, allows greater flexibility to write more or less on a topic. I may write several posts on the same issue or perhaps just write a single post and move on.

Currently I use it to remind me and others of my campaign themes and commitments as a sort of checklist of what I said I wanted to do when I ran for Mayor, so that people can look at it and see how I am doing now that I have been in the role for almost 4 years.

Finally, what can public leaders learn from the way Donald Trump uses Twitter? Do you think his behaviour may actually put leaders off using the platform?

There is so much to learn from the Donald – in particular, how NOT to use Twitter. I don’t pretend to be anywhere near his level of popularity, after all he does have quite the Twitter following, but he is a clear case of someone who doesn’t really think about or perhaps even really care what he writes. Fortunately, we are not all that powerful that we can afford to behave in a similar manner. However, as a communications medium, the sender must always be cognizant of the recipients and how they might interpret your message, so it is important to be clear, concise, honest and polite.

I think the President’s behaviour on Twitter will actually draw more people to use the medium rather than turn them away because he garners so much attention with every single tweet – it’s all anyone is talking about in both mainstream media and on social media. So, I would encourage leaders to use social media to connect with their constituents, but to use it as if you are having a conversation with one person with everyone else listening in 🙂

Many thanks to Charles for his insights into the life  of a ‘social mayor’. It’s clear that transparency and communication are important to his constituents – and social media allows him to deliver on that. Here’s to more community leaders embracing social!