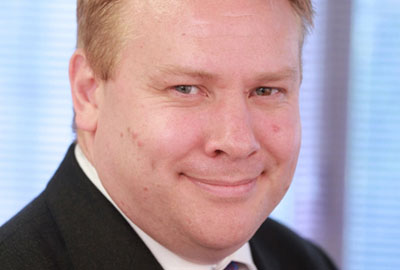 In my latest Social CEO interview Paul Breckell, Chief Executive of Action on Hearing Loss, talks about the value he gets from social media.

Formerly the RNID, Action on Hearing Loss is the UK’s largest hearing loss charity with over 1,000 staff and volunteers and more than 20,000 members. Paul was appointed CEO in 2012, having previously worked for the charity as its Executive Director of Corporate Resources.

Paul is one of a growing number of CEOs of non-profit organizations who are turning to social media – particularly Twitter – to engage with the public and raise their organizations’ profile. In an age where ‘share of voice’ is becoming increasingly difficult through conventional media channels and public relations, social is a powerful resource for leaders willing to embrace it. Follow him on Twitter at @pbreckell.

The Social C-Suite: Paul, what made you decide to sign up for Twitter and what value do you personally get from it?

Paul Breckell: I’ve always used social media personally to keep in touch with friends, share ideas and make connections, so signing up for Twitter was a natural step. I find it an exceptionally useful way to share and connect, both in relation to all things hearing loss, but in lots of other areas of interest too.

As a CEO, how do you think your very visible position on social media enhances Action on Hearing Loss’s PR, communications and fundraising activities?

Leadership demands authenticity. For me, Twitter is the perfect way to engage with supporters and the people who we work with and for. There is incredible value from the charity having its own social media presence (and we do) but I think the direct engagement of a CEO enhances this and gives a level of access and transparency which people quite rightly expect.

“Leadership demands authenticity. Twitter is the perfect way to engage with supporters and the people we work with and for.”

While many charity CEOs are embracing Twitter, most still avoid it. There seems to be a fear of having ‘challenging conversations’. Are these concerns genuine or should CEOs just get over their fears and accept that social media engagement is the reality of modern leadership?

I think the concerns are genuine, but CEOs should overcome them. The main fear I think is around saying the wrong thing, but surely it’s just the same self-discipline in responding as being face to face in a public meeting – be respectful, don’t be rude, be prepared to be challenging and be challenged – and stay professional.

What do you think are the biggest challenges (and opportunities) for charity CEOs to tap into social media?

Breaking out beyond people who are already engaged with your cause. Whilst it’s fantastic to be in conversation with the tens of thousands of people who are interested in Action on Hearing Loss and our work, I really want to talk to the four million people who would could act to tackle their own hearing loss and who would benefit from wearing a hearing aid, but currently don’t.

What advice do you have for CEOs who are afraid of taking the leap onto social media (especially Twitter)?

Make some time for it and be prepared to be authentic – the barriers between public and private life are much less apparent in the age of social media. Go for it, it’s great fun and a great opportunity. You won’t look back.

“Go for it, it’s great fun and a great opportunity. You won’t look back.”

It’s a great list and there is lots of crossover with my question responses. The thing that really resonates is the word ‘opportunity’.

Do you encourage the charity’s employees to use social media? Yes absolutely, the conversation is far richer the more passionate advocates of our work we have on social media.

Really important. Volunteers and staff quite rightly expect openness and access from their leaders; also, there is so much to share and learn about our vision and mission. Many heads are always better than one.

It’s not just on Twitter where Paul is active and visible. In 2104 he posted a video on YouTube urgently appeal to the charity’s supporters to for donations to bridge a potential £2.5 million funding gap. He is also a regular blogger on the Huffington Post.

It’s a real pleasure to feature Paul, another CEO who clearly sees the value of interacting on social media. If I was one of the millions of people in the UK affected by hearing loss, I’d be delighted to have him fighting my corner so publicly.