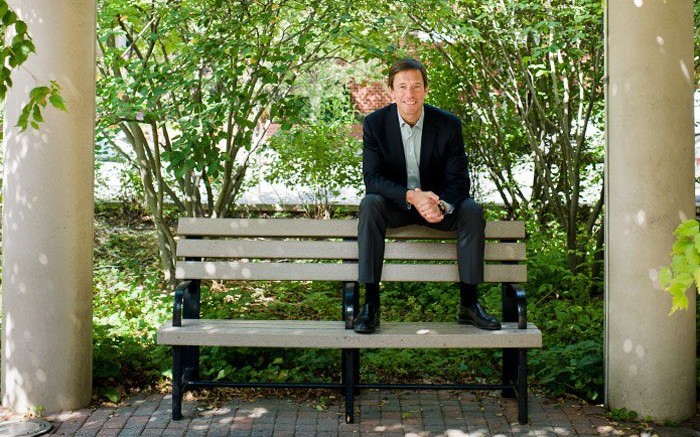 I recently had the pleasure of interviewing Mark Tercek, President and CEO of The Nature Conservancy, for my Social CEO series. TNC is the leading conservation organization working around the world to protect ecologically important lands and waters for nature and people. Mark is also the author of Nature’s Fortune. You can follow him on Twitter at @MarkTercek.

A former Managing Director and Partner for Goldman Sachs, where he spent 24 years, Mark brings deep business experience to his role leading the Conservancy, which he joined in 2008. Apparently when he heard the news that he’d got the job as CEO he was so excited that he backed his Jeep Grand Cherokee into a tree, shattering the back window. Anxious that gouging a tree might be a bad omen, he jumped out to see how bad it was. To his relief, he’d done far more damage to his vehicle than the tree!

He certainly is leaving his mark, on trees and elsewhere, by championing the idea of ‘natural capital’ — valuing nature for its own sake as well as for the services it provides for people, such as clean air and water, productive soils and a stable climate.

In terms of social media, Mark is very active and uses all channels at his disposal to spread the message of the organization he leads – as well as his own environmental philosophy. He is of course on Twitter (13,600 followers) and LinkedIn, but it doesn’t end there. He has his own blog and writes for the Huffington Post. In addition he posts regularly on LinkedIn Pulse (where he has over 185,000 followers) and on The Nature Conservancy’s own blog.

Mark, as a self-confessed ‘city kid from Cleveland’, what made you give up your position at Goldman Sachs to join the world’s largest environmental charity?

My final position at Goldman Sachs—after 20-plus years as an investment banker—was leading the firm’s brand new Environmental Markets Group. Our strategy was to find opportunities for businesses, including Goldman Sachs, to do two things: 1) improve their financial results and, 2) achieve positive environmental outcomes. The more we looked, the more opportunities we found. I became so positive about such opportunities that I decided to pursue the position at The Nature Conservancy.

“Social media is a powerful tool for spreading and sharing ideas.” This was one of your eight key changes and trends in the environmental field at the ‘Designing the Future’ Roundtable in 2013. Can you expand on this?

One of TNC’s goals is to inspire larger and more diverse constituencies to care for nature and support organizations like ours. Social media is a powerful way to do that. Ours is an ideas-driven business, so we use social media to share and test our best ideas. We also use social media to inspire people. We want people to understand that we can make significant progress and that everyone can help us do so. I can’t imagine a CEO in any business not wanting to use social media as a tool for advancing their organization’s mission.

“I can’t imagine a CEO in any business not wanting to use social media as a tool for advancing their organization’s mission.”

Following on from the question above, you’re personally very active on Twitter, sharing a mix of original opinions and insights, articles and retweets. What are the key advantages for you of being active on Twitter in this way?

I started tweeting a few years ago because I thought TNC could do more to get involved in social media. And what better way to get things moving than to lead by example? It worked. Today a lot of people at The Nature Conservancy are active in social media, which is great for our organization. In my case, sometimes colleagues now approach me with topics or suggestions for tweets, which I’m receptive to. So, in that way I now get some help. But, the key thing on social media is to be transparent, genuine and authentic. The best way to accomplish that is to do it yourself.

I’ve noticed more and more CEOs of not-for-profit organizations signing up to Twitter and engaging with stakeholders. I’ve even heard CEOs described as ‘Chief Storytellers’. Is Twitter engagement now a necessary part of any charity CEO’s job description?

No, I don’t think so. I do think that most nonprofits would benefit from having an active presence on social media. But I don’t think it’s mandatory for CEOs to be a part of that. Twitter’s platform will always be better suited for some CEOs than others, and it’s up to each to make the choice about using it.

“The key thing on social media is to be transparent, genuine and authentic. The best way to accomplish that is to do it yourself.”

Do you find Twitter more useful for sharing information or for interacting with people – or a combination of both?

I find Twitter very useful in two important ways. First, it provides me an opportunity to share my own views or others’ views that I believe deserve more recognition. Second, Twitter gives me a great way to stay informed. Some of the people I follow are extremely good at posting important news and publications. This means I can be sure that I’m current with all the important trends in our business.

Your approach to the environmental challenges facing us often involves engaging with big business. The Nature Conservancy’s partnership with Dow Chemical Co. springs to mind. Many argue that you’re far too close to these types of organizations and you’ve received a lot of personal criticism for it. What do you say to organizations like Greenpeace who strongly disagree with your stance? And – more importantly from the perspective of this interview – how do you deal with criticism and personal attacks on social media, where it’s all out in the open?

To answer your question about criticism in general, I’ll say what I always say to my colleagues: “Our critics are our friends.” What I mean is, most of the time, TNC’s critics are people who care very much about achieving environmental progress and mostly want the same outcomes that we are pursuing. Sometimes, our critics think our strategies have flaws. And that’s okay. While we think our strategies make sense, we also don’t mind people keeping a close eye on us, bringing issues to our attention and holding us accountable for outcomes.

Much of what we do at TNC has never been done before. So, we try to be as transparent as possible. It’s best to get things right the first time, but if we do get something wrong, it is good to know that too. And our critics help us with that. So that’s why I say “our critics are our friends.” However, criticism can be overdone. I personally think there is way too much divisiveness and fault finding in the world these days. To tackle the world’s environmental challenges, I’d like to see some more positivity and open-mindedness. I believe the more strategies, the better. We need to see what works best.

Bearing in mind that the CEO is often the one in the line of fire, what would you say to CEOs who are afraid of Twitter? Can you sympathize with their reluctance to stick their heads above the parapet, or do they need to get over it and accept that this is the nature of modern leadership?

Again, whether or not CEOs should engage in Twitter or other social media channels is up to them. Everyone has their own style. I’m proud of the work we do and I am enthusiastic about sharing it with my Twitter followers. I’m also eager to have more people become aware of our work and social media is another way to do that. But just because it works for me doesn’t mean it works for everybody.

You blog a lot – on your own blog and on LinkedIn, the Huffington Post and the Nature Conservancy’s blog. First of all, how do you find the time? And secondly, why do you think it’s important for you, as CEO, to be writing in this way?

I write my blogs for two reasons. First, I like to share what I’m doing and what I’m learning with my team and TNC’s supporters, at least whenever I have something important to report. Second, especially when I was just getting started in this business, I had so much to learn. I find that taking my less-developed ideas and making sense of them through a small essay, which is what blogs are, is a really good tool to accelerate my learning.

How do I find time? It’s a struggle. Indeed, I don’t write as many blogs as I would like. But I do as much as I can. I travel a lot, so time in airports and airplanes creates an opportunity for me to read and write.

Finally, what do you think are the biggest challenges facing humanity today? What should we collectively be doing to face these challenges to ensure our planet is safe for generations to come?

Perhaps I’m a little biased by the nature of our work, but I think the biggest challenge facing humanity today is climate change. Unless humankind takes action to reduce greenhouse gas emissions in the fastest way possible and at the greatest scale possible, we will see a lot of suffering that could otherwise have been avoided. Further, we mostly know what to do to address climate change. And while those solutions might not be cost free, the cost of action is very low while the cost of inaction is extremely high.

So it’s frustrating to me that more is not happening now, though I do understand these are difficult issues. Anyway, we at The Nature Conservancy are going to do everything that we can to get moving so that we make the progress that’s so badly needed.

Mark is a modern CEO who understands full well the power and influence he has to drive forward the agenda his organization. Sure, TNC has a communications team, but he, as its head, has incredible power and influence over how the organization is perceived – through his blogging and social media activity. It’s a bit like being a band leader: you have the vision; you call the shots – and you stand at the front of the stage.