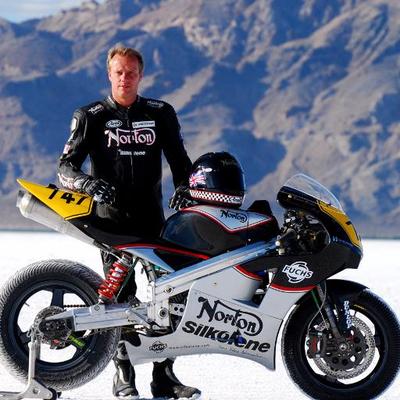 This week we’re featuring Stuart Garner, the CEO of that great British icon Norton Motorcycles.  Stuart bought the ailing company in 2008 when it was on its knees, restoring it to its former glory and breathing new life into the British motorcycle industry.

He now lives in Donington Hall, Leicestershire, a stone’s throw from Donington Park racing circuit. Norton’s factory is also in the grounds of the hall from where it produces 1,000 bikes a year.

Funding the early stages of the business wasn’t easy, but that all changed thanks to social media. In 2012 George Osborne, the Chancellor of the Exchequer, announced that the British government has invested  £10m in Ford, so Stuart tweeted Osborne asking, “What about us?”

Stuart tweeted Osborne asking, “What about us?”

Within a week Osborne’s private secretary called, saying they’d seen the tweet and would like to have a conversation. The result was £4m in government funding to support 600 new jobs for Norton and its business partners.

Within a week Osborne’s private secretary called, saying they’d seen the tweet and would like to talk. The result was £4m in government funding.

This isn’t just an example of the power of social media. It’s also a great example of a CEO who understands this power and is willing to put it to good use. Because of his innovative approach to social media, The Social C-Suite contacted Stuart (via Twitter of course – we walk the social media walk!) and asked if he’d be happy to share his thoughts on social and how he uses it as a CEO. We DMd him a few questions and this was his response. Remember, this was ALL done via Twitter; such is the power of social media.

Stuart: “I enjoy using Twitter as  it connects me to everyone globally and also has great interaction. I don’t particularly have an agenda with it, I just go with the flow and keep connected with people and tell them what we’re up to at Norton in a non-corporate way. People are fed up with spoon-fed PR.”

The Social C-Suite: We can’t seem to find you on LinkedIn – is there any reason for that? LinkedIn is usually touted as the ‘professional’ social network, but I’ve come across quite a few CEOs who don’t use it.

Stuart: LinkedIn is a nightmare. You only get people wanting something from you, very rarely do you get good value back from it. Instead you’re just inundated with people chancing their arm for supply or other business.

The Social C-Suite: Many people say that having a Social CEO makes a brand more human. Do you think your use of Twitter helps promote the Norton brand or ‘image’?

Stuart: Social media totally helps get connected and gives the brand a face. It helps a lot to connect and listen to feedback. It’s so direct and it helps guide us to the views and opinions of others. It allows you to contact people globally in an instant – that has to be a good thing for the brand.

“Social media is so direct and it helps guide us to the views and opinions of others. It allows you to contact people globally in an instant – that has to be a good thing for the brand”

The Social C-Suite: If you could give advice to other CEOs about using social media (especially Twitter) what would it be?

Stuart: I’d say do it, but be honest and be true to yourself and your brand/business. You soon get uncovered if you try to construct content or have hidden agendas with tweets.

The Social C-Suite: Finally, do you think it will soon be essential for CEOs to be ‘social’?

Stuart: CEO’s should be there now. It depends a little on what business you are in of course, but it’s a great platform to get connected with ALL stakeholders. This gives better and faster understanding of all aspects surrounding your business. Then you have the opportunity to communicate and react to this. It really is a great tool in the CEO toolbox!

“CEOs should be on social media now. It’s a great platform to get connected with ALL stakeholders. This gives better and faster understanding of all aspects surrounding your business”

That’s a powerful endorsement of social media (but not LinkedIn!) from a well-respected CEO.  If Stuart Garner is doing it, you have to ask why other CEOs have yet to cotton on.

Perhaps it’s down to his personality. In 2009 he set the world land speed record for a rotary-powered motorcycle (on a Norton of course) at 173mph at the Bonneville Salt Flats in Utah. Why? Because, like Richard Branson, he believes it’s vital for people to see the owner of the brand ‘living’ the brand.

Not all CEOs can ‘live the brand’ of course. How do you ‘live’ insurance or banking? Oh wait, there are CEOs who do that too: check out Jack Salzwedel (insurance) and Peter Aceto (banking).

The point is, in 2016, stakeholders are increasingly expecting the leaders of businesses and non-profit organizations to be visible on social media. They may not need to ride motorcycles at 173mph, but they do need to ‘ride the social media bike’ as Walter Adamson says.