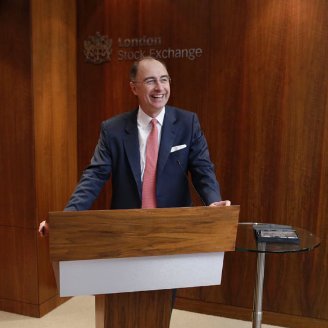 Born into the Algerian civil war, raised in a run-down Paris banlieu – and now CEO of the London Stock Exchange. Our Social CEO of the week, Xavier Rolet, is not what you’d expect from the head of such an august institution.

As Jim Armitage writes in ES Magazine, Rolet’s parents had little formal education, so they enlisted in the army and were sent to Algeria at the time of the war for independence, which is where Xavier was born. When the French pulled out of Algeria in 1962, his family – along with tens of thousands of other French Algerians – were resettled in the Paris banlieu of Sarcelles, a depressing and deprived concrete jungle.

A desire to learn and to be the master of his own destiny drove him to study management and make a career in business – a career that has taken him from the banlieu to heading up the London Stock Exchange.

Rolet is also very active on Twitter and LinkedIn. He talks not only about the Stock Exchange, but also about wider economic and political issues. He is strong in favour, for example, of Britain remaining in the UE and is not afraid to tweet about it. On LinkedIn he is recognized as an ‘Influencer’ and writes regular Pulse articles.

It’s refreshing to see the CEO of what could be seen as a rather conservative institution embracing new media in the way he does. And if Rolet can do it – other CEOs in the financial sector can do too!