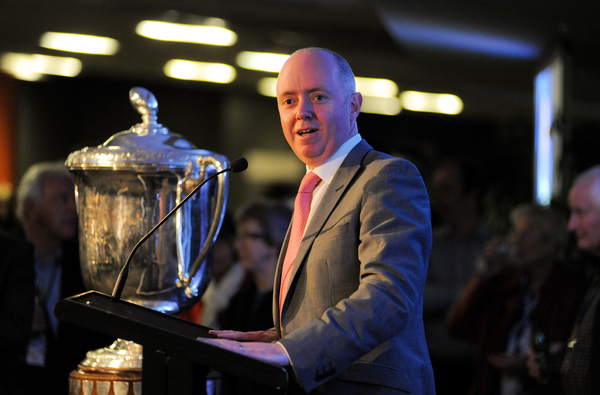 Being the CEO of a large stadium sounds like a fun job, especially if you can tweet about it. But what’s it really like? The Social C-Suite spoke to Shane Harmon, CEO of Westpac Stadium in Wellington, New Zealand, to get the low-down.

A comms person at heart, Shane is a veteran of two Rugby World Cups: RWC 2003 in Australia, where he was Head of Marketing, and RWC 2011 in New Zealand, where he was General Manager, Marketing and Communications for Rugby New Zealand 2011. He’s also worked in senior roles for the Australian Rugby Union and the Sydney Swans Football Club.

He has been using Twitter for over eight years and over that time has really come to understand its value. We caught up with him to find out more.

Shane, how important is it for you, as the CEO of Westpac Stadium, to be visible and active on Twitter?

I’ve used Twitter actively for over eight years – well before I started my current role. It’s very important to me both professionally and personally. It has enabled me to connect with and forge friendships with global sports industry professionals at a level that would have been unimaginable ten years ago. In terms of my current role, Twitter enables me to reflect the work we’re doing at Westpac Stadium, but also connect with fans on a regular basis. It’s important for me that we are seen to be approachable and open to ideas and feedback.

Connecting with the wider sports business and monitoring the trends that shape our industry. I’m an avid reader and sharer of content that I find may of value to the community. So much so that I curate the best content into a Flipboard magazine, Sports Business Today, which now has 5,000 subscribers, and which I hope provides value to the sports business community.

Who do you see as your main audience? Is it sports fans, others in the venue industry, other CEOs, employees – or a combination of all of those?

Sports industry professionals and sports fans – and the two groups are not mutually exclusive. I believe having fans and professionals in the same discussion is very positive – there’s often as much interest amongst fans about the business behind the sport as the sport itself.

Research by eMarketer in 2015 showed that social media was the number one digital content platform for UK rugby fans. I imagine it’s a similar trend for sports fans globally. What are the implications of this for the sports venue industry?

Venues around the world have generally been slower than teams or leagues in adopting social media as a means of engaging fans. Fans come to see teams and stars – the venue is just the backdrop, the stage. There are issues galore to deal with on game day and some venues have been reluctant to throw themselves into the social media space due to lack of dedicated resources and a fear of providing a megaphone for potentially negative comments.

The most successful venues on social media ensure that their social media staff have full integration into stadium operations. Rapid response and a direct line of communication to the key service providers is vital.

It’s also important for venues to understand their role. Live play-by-play updates are not the role of the venue. Sure, give half time and full time scores, but avoid duplication and potentially tension with tenant teams. Venues also have great content of their own. There are many behind-the-scenes opportunities that can be very interesting to sports fans.

With you strong background in sports communications and marketing, are you still a comms person at heart? Has that background influenced how you operate as a ‘social CEO’?

Absolutely. Social media gives executives the opportunity to initiate and influence online conversations. Rather than waiting for messages to be picked up and driven by the media, executives can use social platforms to help shape their public image and build their personal brand – and that of their organisations.

I recently interviewed Brett Gosper, the CEO of World Rugby, who said: “As a CEO I value the wealth of opinions and strong feeling that one can gauge from social media. It’s like a rich and continuous focus group informing us of opinion on all aspects of what we do.” I take it you’d agree with him?

Very much so. One of the biggest benefits is it shows you care, even if you may disagree on some of the issues. It’s not for the faint-hearted though, as being active can be a double-edged sword. You do have to have a reasonably thick skin and have a strong sense of self-awareness around how to respond in a very public setting.

More generally, in our socially connected age, how important is it for leaders to engage with stakeholders on social channels?

The answer to this question needs to start with the organisation and how the company uses social media to engage with customers. If a company is simply using social like a RSS feed, churning out bland corporate statements and not responding to customer queries, then there is going to be a lack of synergy between the company and an active CEO’s personal accounts. There are many business benefits to being a socially connected CEO, from demonstrating thought leadership and providing accessibility to engaging with stakeholders and learning from other leaders. The benefits are enhanced when the organisation’s and exclusive’s approach to using social media are congruent.

If you could give reluctant CEOs some Twitter advice, what would it be?

Start slowly. Follow active CEOs such as Salesforce’s Marc Benioff and Virgin’s Richard Branson. Note that many successful executives on social media tweet about personal opinions and interests as well as information closely related to the business. This approach gives excellent insight into the individual behind the desk. There is no “one size fits all” approach. Decide what works best for you and your organisation.

In my experience Twitter enables CEOs to make a direct, personal connection with customers and the wider industry. It is important to put thought into what you put out there. Before you post, ask yourself is your content adding value to your target audience?

“Twitter enables CEOs to make a direct, personal connection with customers and the wider industry”

I’d also add that social media is a powerful personal brand builder. Your LinkedIn and Twitter profiles will appear on the first page of google search for anyone researching you. If you use these channels effectively they can be powerful differentiators.

In this Facebook post, Pro Rugby North America owner Doug Schoninger says “the sun is setting on traditional media platforms.” He asserts that new platforms (like Facebook Live) are bypassing mainstream TV coverage and giving fledgling sports leagues like Pro Rugby access to an online audience that wasn’t available before. How do you see this trend affecting sports broadcasting more widely over the next few years?

I see social platforms complimenting rather than replacing mainstream TV for major rights holders. The NFL’s excellent foray into Twitter is a prime example. By broadcasting on Twitter the NFL enabled both the game – and the conversation around the game – to occur in one place. However, the viewership numbers were a very small fraction of mainstream TV.

TV revenues have surpassed game day revenues as the single most important funder of pro sports. I don’t see Twitter or Facebook making an exclusive grab for major sports content in the near future. The one to watch for me will be Amazon.

I also believe that technology still has a long way to go before the quality of streaming matches traditional broadcast. There are real technical difficulties in supporting millions of users on many different devices that rely on varying quality of internet connectivity. The lag factor also needs to close further. Lag and live sports are not compatible.

That said, live streaming offers significant opportunities for second tier sports to attract an online audience that they are unable to active through mainstream. It’s a privilege to work in this industry. We are lucky to host an amazing variety of events. Over 2016/17 we have hosted or will host the Edinburgh Military Tattoo, AC/DC, Guns n Roses, Super Rugby (including the final for the last two years), the British and Irish Lions Tour, All Blacks tests, FIFA World Cup qualifiers, Sevens World Series, international cricket and A-league football, as well as a whole range of exhibitions and trade shows. That said, you don’t tend to see a lot of the events. My role on event day involves a pair of comfortable shoes and lots of walking around!

The main aspects of my role are attracting major events, working with our key hirers to achieve mutual goals, and managing a team of professionals that are continually seeking ways to enhance the facility and improve the patron experience.

Finally, with Millennials set to become 50% of the workforce by 2020, are you considering signing up for Snapchat any time soon? 🙂

I’m ahead of you there! Snap me at shaneharmon1 🙂

(That must be the first CEO we’ve interviewed who is on SnapChat. The world is changing, folks!)

Massive thanks for Shane for taking part in this interview and for sharing some really interesting insights, not just about social media, but about the business of running a major venue and the future of sports broadcasting.